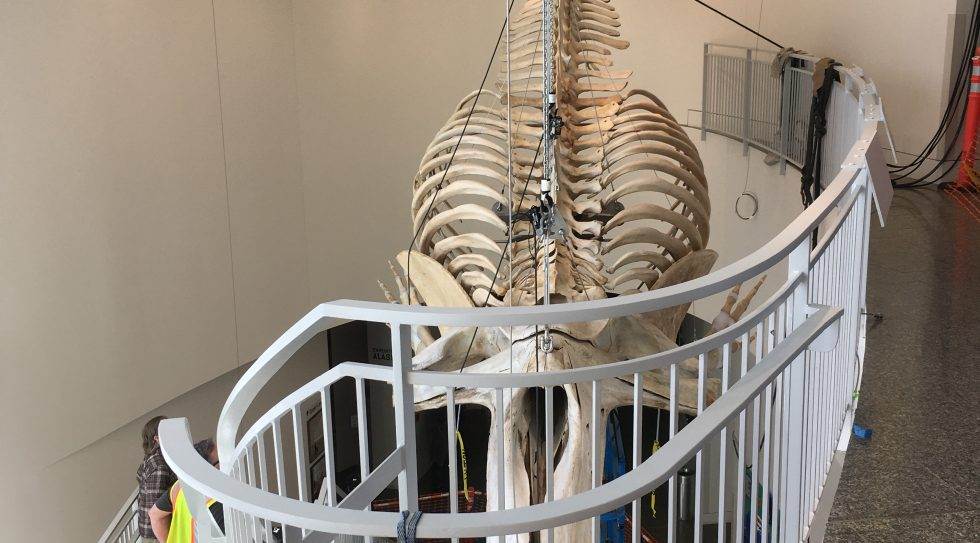 This spring there occurred at the University of Alaska Museum of the North (UAMN) a whale raising. Like a historic barn raising, there was immense preparation, wide participation across many different specializations, and a well-deserved celebration at completion. Unlike a barn raising, the result was a 43-foot bowhead whale skeleton suspended in mid-dive from the ceiling of the museum lobby, nosing under the mezzanine to greet arriving visitors and maybe to find a wayward school of krill swimming over the reception desk.

Originally harvested by Iñupiaq whalers in 1963 as part of a traditional autumn hunt, the whale skeleton came to the museum in 1969 and the skull was first put on display in the Alaska Gallery in 1980. When architect Joan Soranno designed the museum expansion in the early 2000s, hanging hooks intended for the eventual whale installation were installed above the lobby ceiling.

The Bettisworth North team’s involvement began three years ago, in July 2018, when the University of Alaska Fairbanks (UAF) asked us to create some visualizations of the to-be-installed whale. These graphic renderings were used to help win approval from the board of The Bill Stroecker Foundation for their generous donation to cover all costs of installing the whale in the Museum of the North. Following UAF’s successful presentation to the board, in October 2019 Bettisworth North came on board to develop design and construction drawings with PDC Engineers (providing structural and mechanical engineering) and Coffman Engineers (providing electrical engineering). Bettisworth North’s tasks included code review, finish detailing, handrail reconfigurations, exhibit interpretive panels, and fireproofing analysis.

The construction documents were issued in November 2020. Unfortunately, the previously placed hanging hooks were not utilized due to an updated understanding of the whale placement and seismic considerations. Fairbanks own Alcan Builders installed new structural braces, rerouted existing above ceiling systems to accommodate the installation, welded up the handrail and interpretive panel supports, and installed new finishes where needed. Because of reduced museum hours due to the COVID-19 pandemic, this work was able to proceed faster than previously expected.

Meanwhile, a cross-disciplinary team including UAMN’s mammal collection specialists, 3D printers, UAF’s Department of Fine Arts, welders, and “The Bone Man” Lee Post were hard at work preparing the bones for installation. The oily bones had to be soaked for four months in a foul-smelling brew of oxygenated water and microorganisms with a piece of a rotten sperm whale to keep the microbes happy. Then the skeleton was painstakingly assembled, with missing bones 3D printed and hand-painted to resemble the real bones, silicone applied in lieu of cartilage, and an armature welded in place to support

…There have always been big hopes for the specimen, even if they’d gone largely unrealized. Those dreams may have even originated with Bill Stroecker ’42, a local banker and museum supporter who died in 2010. The lifelong Fairbanksan frequently talked about the visual impact of a whale skeleton hanging near the entrance, providing a memorable, massive greeting for visitors…

Finally, after almost 60 years in the making, the whale was raised into position in the UAMN lobby on a beautiful spring afternoon May 5, 2021. It was a joyful and mostly informal ceremony. Words of thanks and congratulations were said, babies smiled, and the whale was slowly moved into position by Alcan Builders and UAMN staff. The event was doubly joyful due to the availability of COVID-19 vaccines allowing the gathering to take place after a year of canceled events. I am so thankful to have been able to do a small part in this tremendous endeavor, and I look forward to many years ahead taking my baby boy to the museum and gazing awestruck at the bowhead whale nosing down under the mezzanine to meet us at the door. 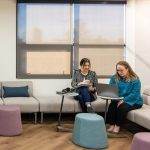 Helping Expand the Reach and Impact of Interior Design 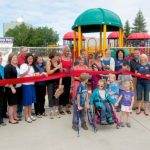 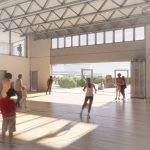